For some time now, the best-selling car in America hasn't been a car. It's been the Ford F-150 pickup truck, which has evolved through the decades to become a one-size-fits-all machine. It hauls cargo, tows trailers, conquers rough terrain, and modern incarnations are luxurious interstate cruisers with plenty of space for five adults. But it sure didn't start that way.

Originally a barebones truck for hauling items, the F-Series is now an everyday vehicle that, in top-trim, offers prolific luxury with impressive capability. That evolution didn't come without a price however, and in this instance we mean that literally since the modern F-150 can get uncomfortably close to six figures.

The journey of the F-150 is a long one, starting just a few years after World War II in 1948. It wasn't called F-150 at that point – the familiar moniker actually wouldn't appear for another 27 years – but the foundation was set in steel. The folks at Fleet Logging assembled a neat pictorial taking us through each generation, showing what changed and what remained the same through Ford's half-ton pickup evolution that now spans nearly three-quarters of a century. 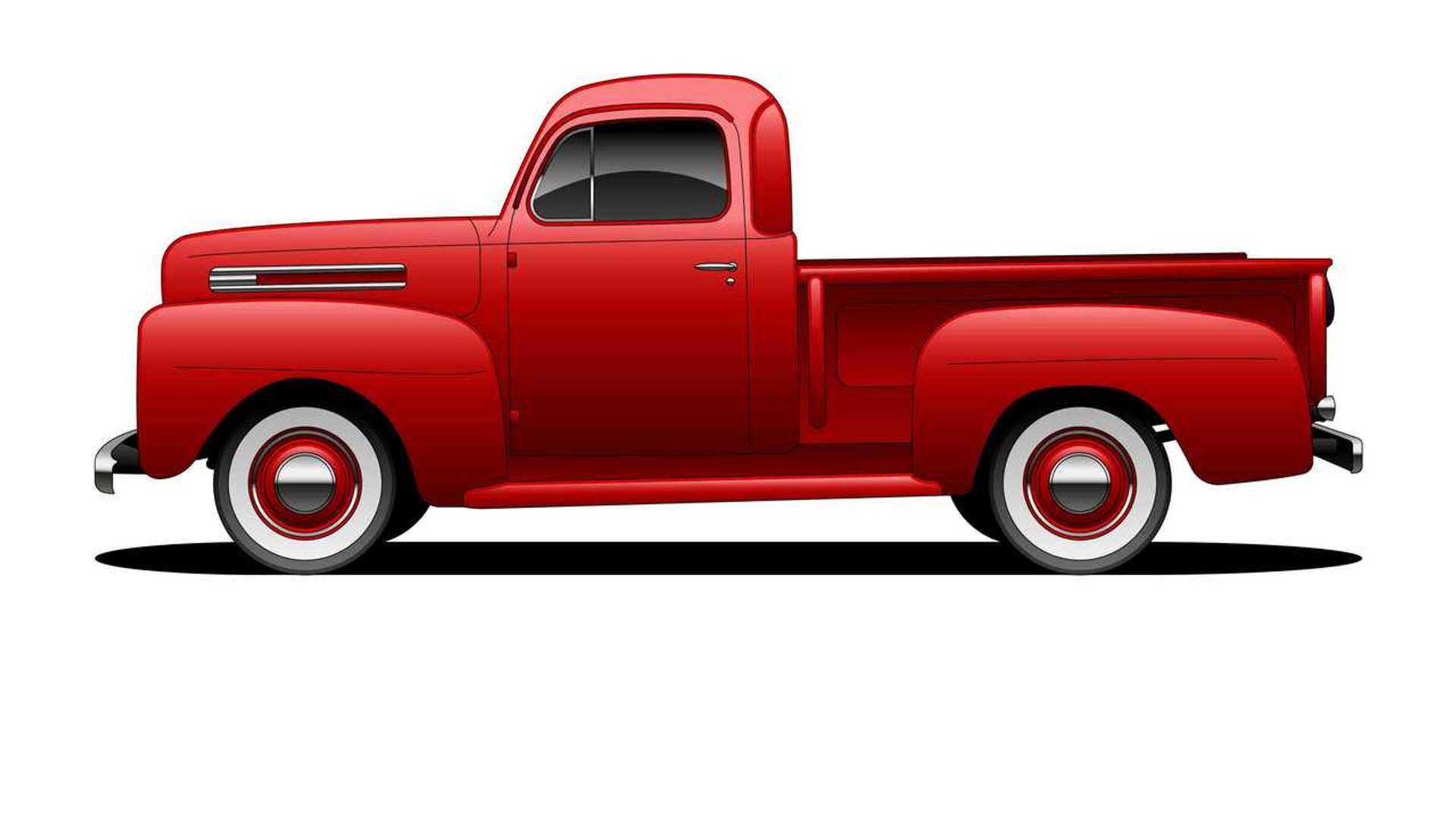 It all starts here with a very modest truck called the F-1. Ford's hierarchy of trucks was simple back then, with the F-1 holding the spot as the company's half-ton offering followed by the F-2 three-quarter-ton and the beefy one-ton F-3. This was a time when pickup trucks were trucks, providing driver and passenger with a seat, manual transmission, a choice of an inline-six or V8 engine, and little else. 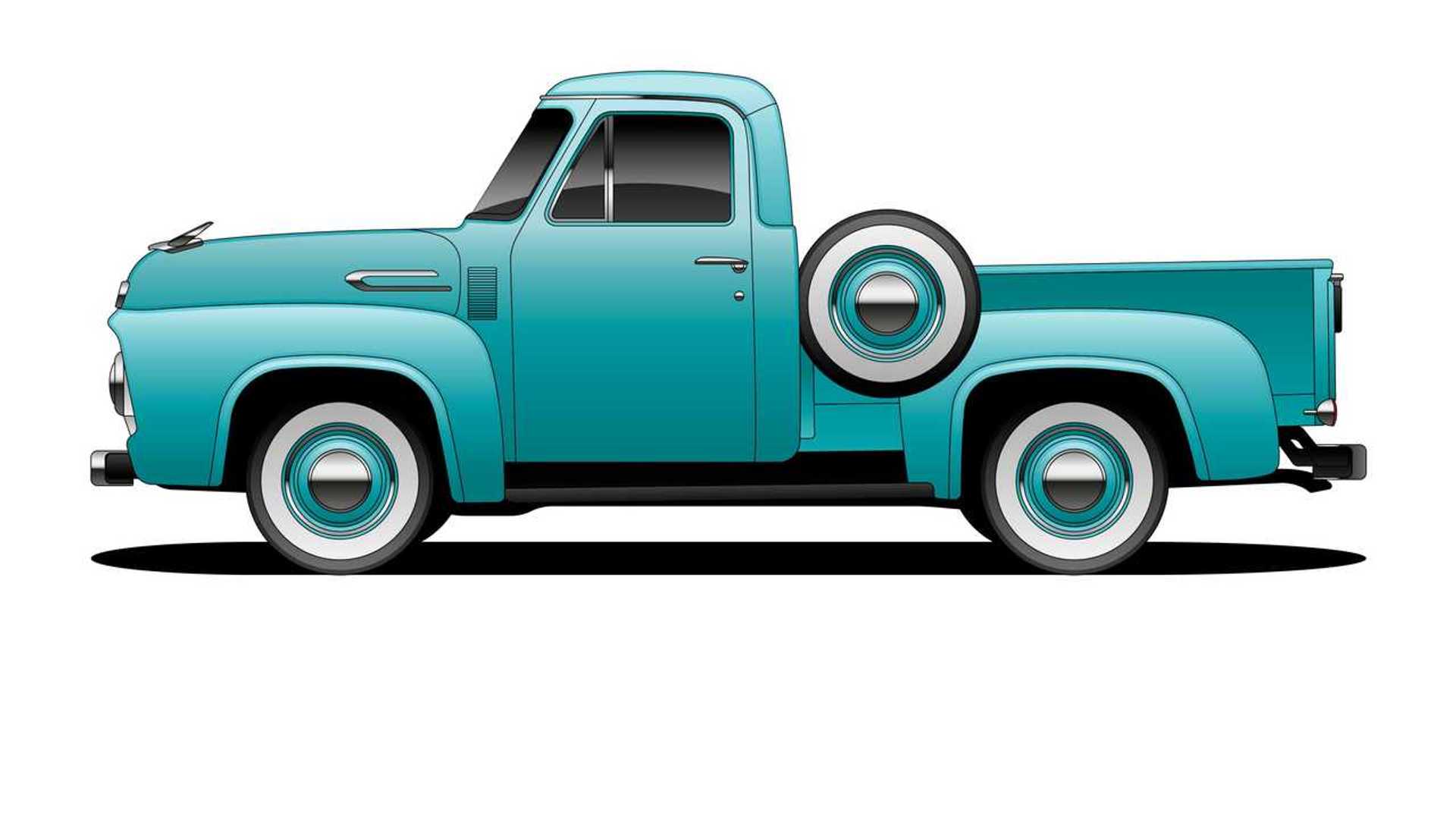 Ford expanded the name of its truck line to the familiar format we have today, though the F-1 became the F-100, not the F-150. The redesigned truck had a longer hood with more integrated body panels, separating from the post-war F-1 that still relied on design cues from the late 1930s. An automatic transmission option was available for the first time, and "creature comforts" like color-keyed upholstery were offered. 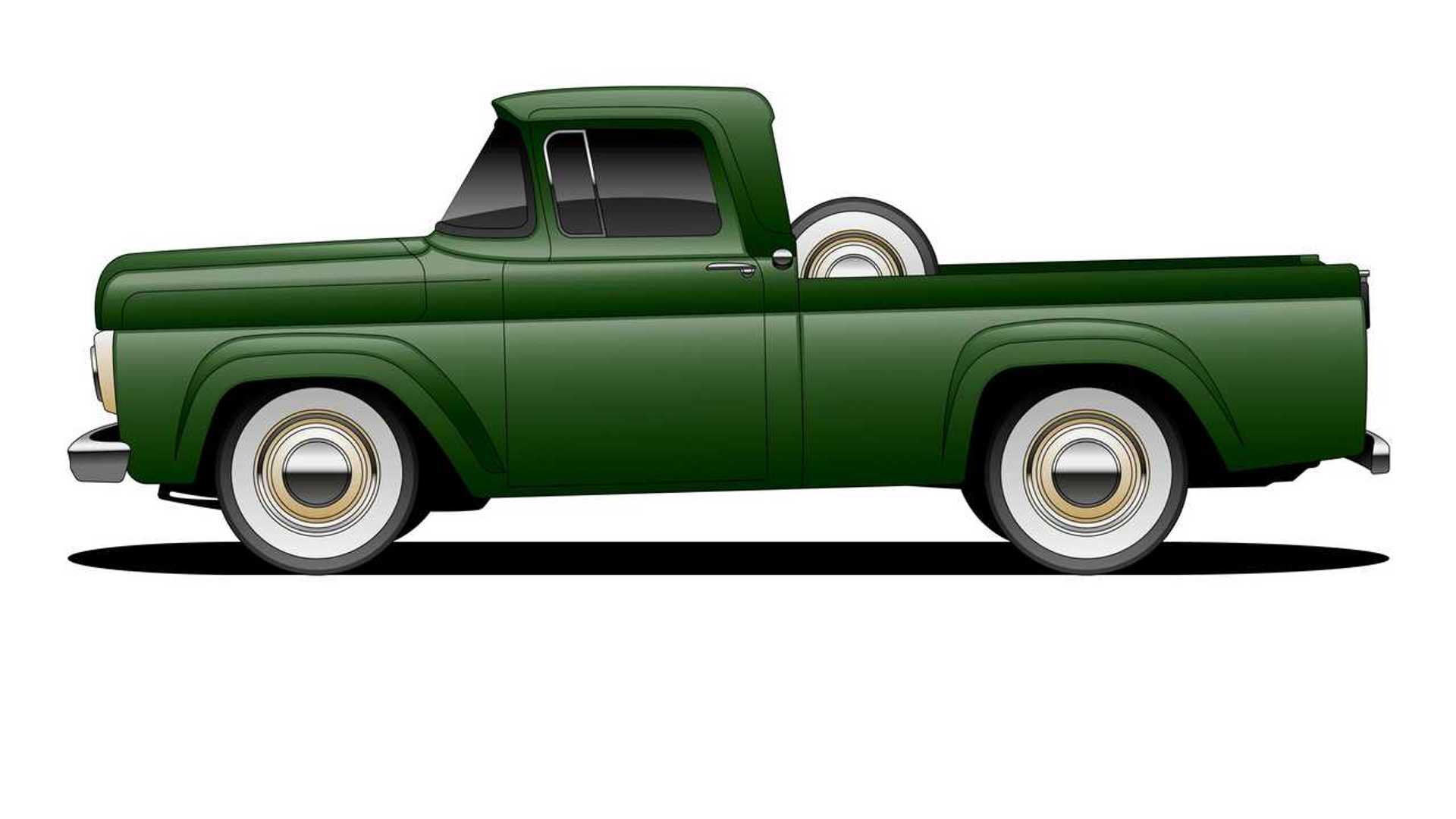 You might say the modern F-Series pickup started with this generation, which eliminated much of the curves in favor of straight lines and introduced the flat-sided styleside bed. The cab was larger, and for off-roaders, four-wheel drive was introduced as an option for the first time. 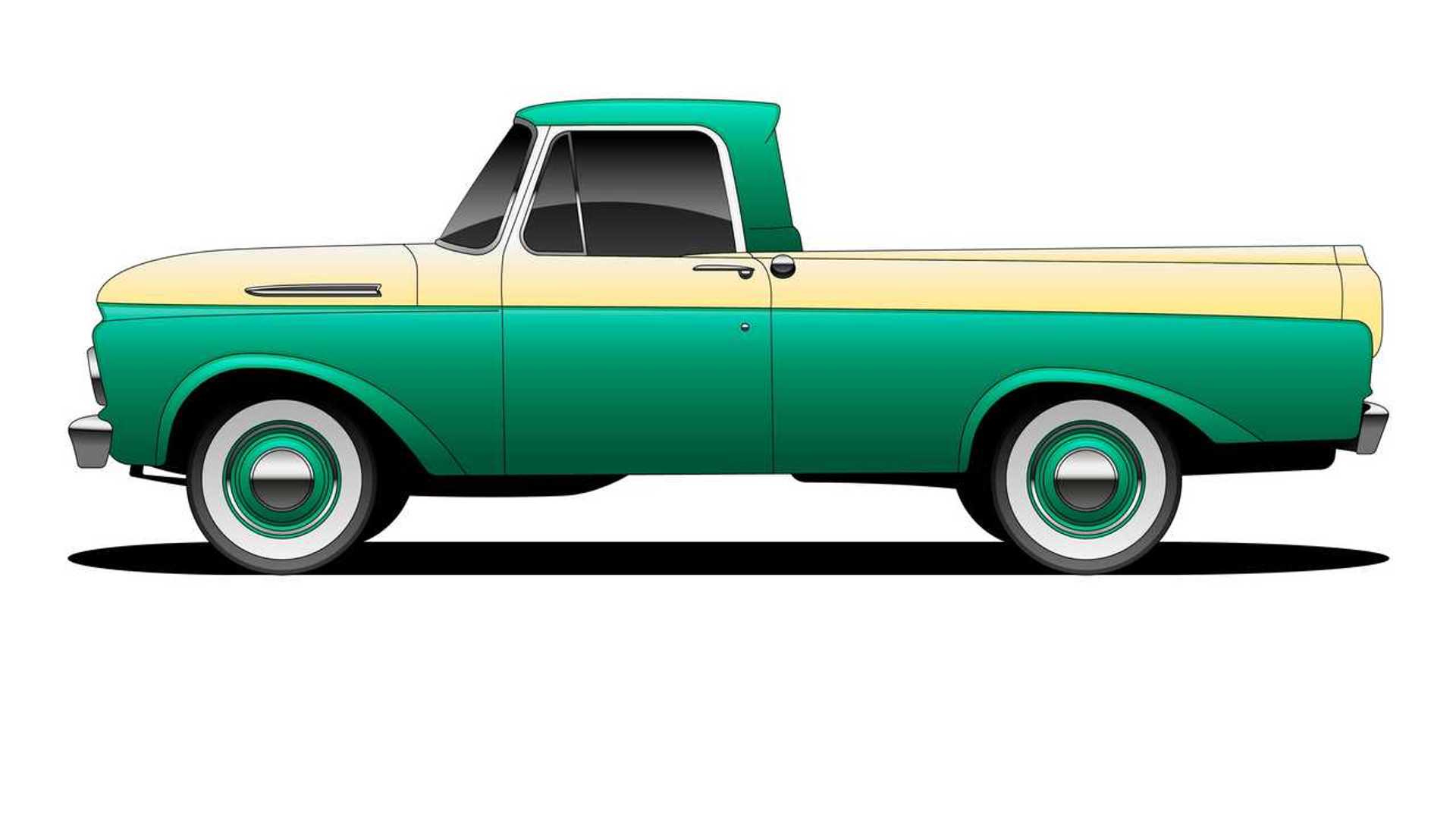 Ford made a curious decision to offer the fourth-gen F-Series as a unibody-type design with the cab and bed a single component on the traditional frame. It didn't last long, but twin I-beam front suspension introduced here would serve Ford for decades. Power steering and brakes also became optional items, making the pickup much easier for everyday driving. 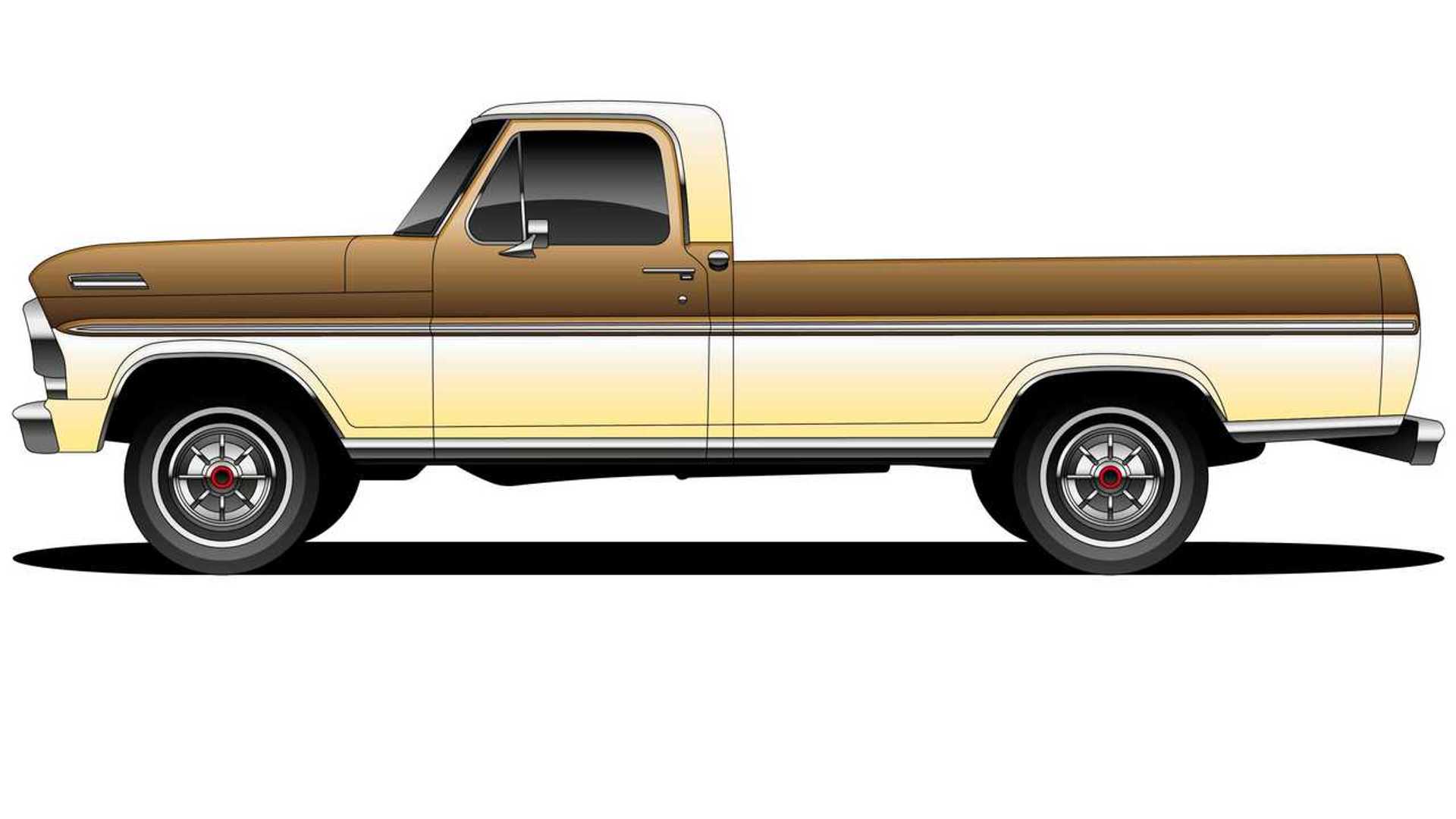 The F-100 grew in size for its fifth generation, including wheelbase and cab dimensions. More attention was given to passenger comfort with upgraded interiors and optional air conditioning, and Detroit's muscle car influence was seen under the hood with some big engine options. 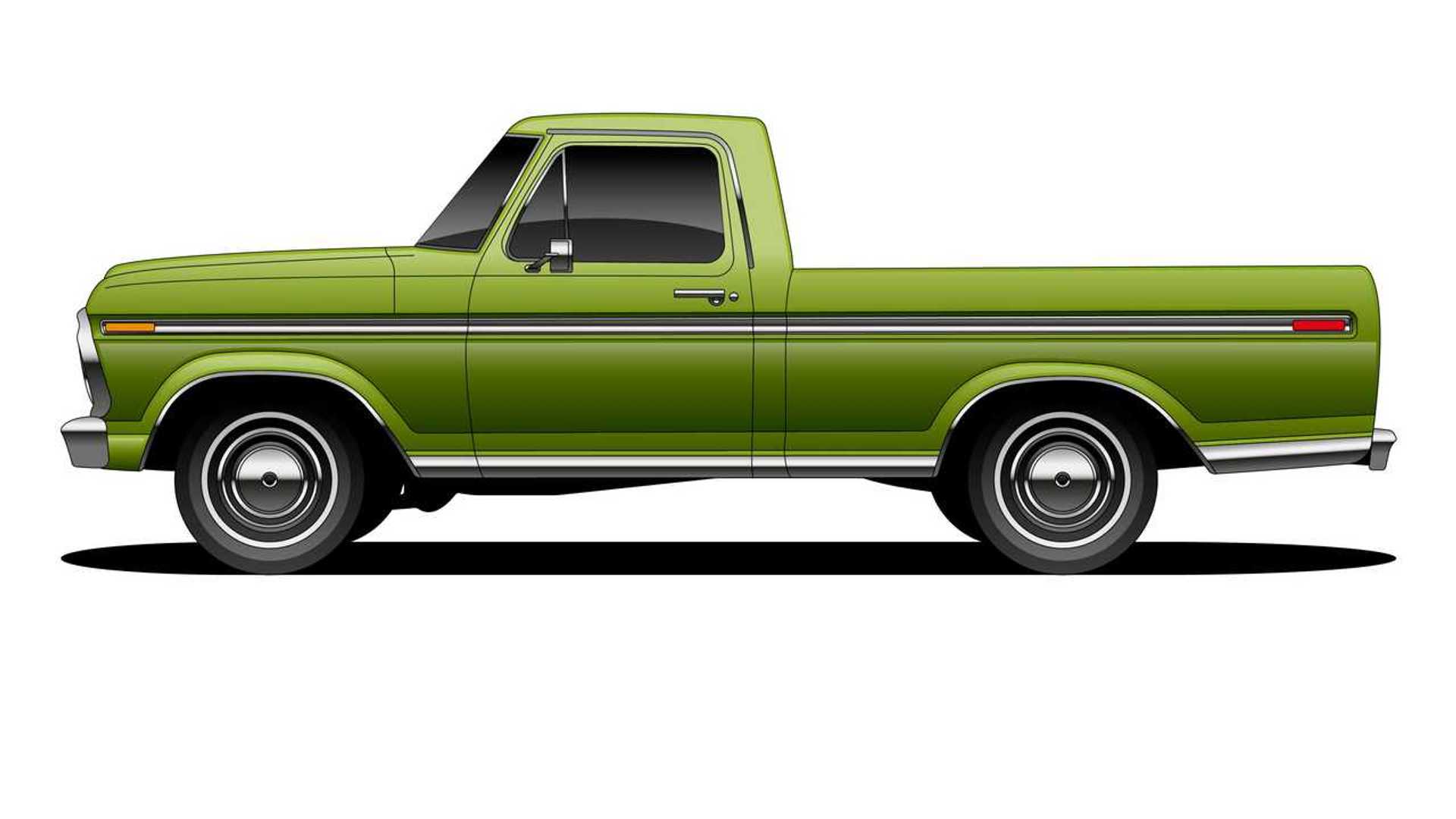 At long last, we've arrived at the dawn of the F-150. The model was introduced in 1975 as Ford's heavy-duty, half-ton pickup. This generation also saw the introduction of Ford's extended Supercab model, a further indication that trucks were evolving from work-based vehicles to family machines. 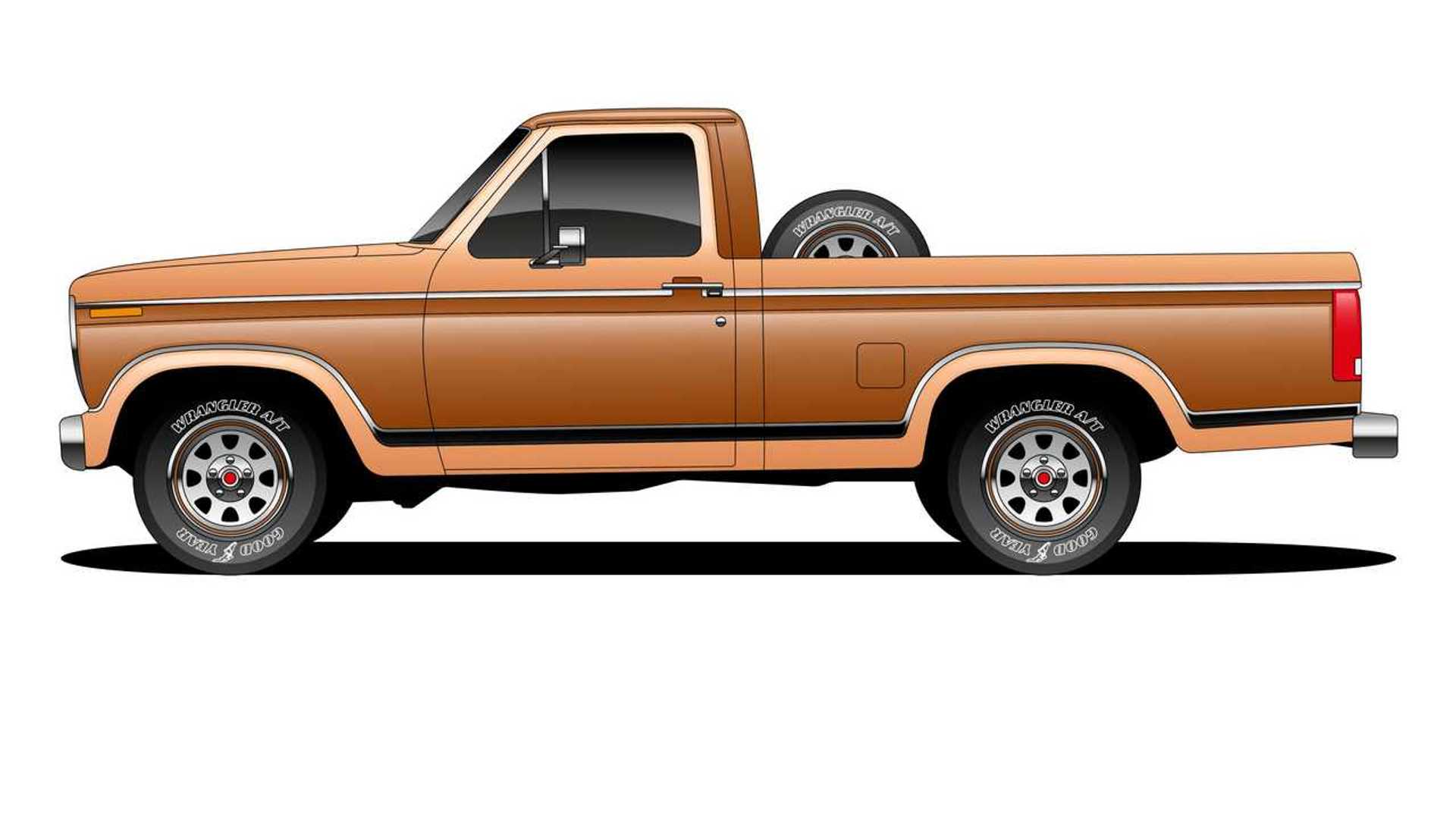 Whereas the previous generation saw the arrival of the F-150, the F-100 actually continued into the 1980s until it was dropped in 1984. The F-Series had already cemented itself as the best-selling truck in America, and additional refinement with a completely new body and chassis further made it a comfortable everyday vehicle. 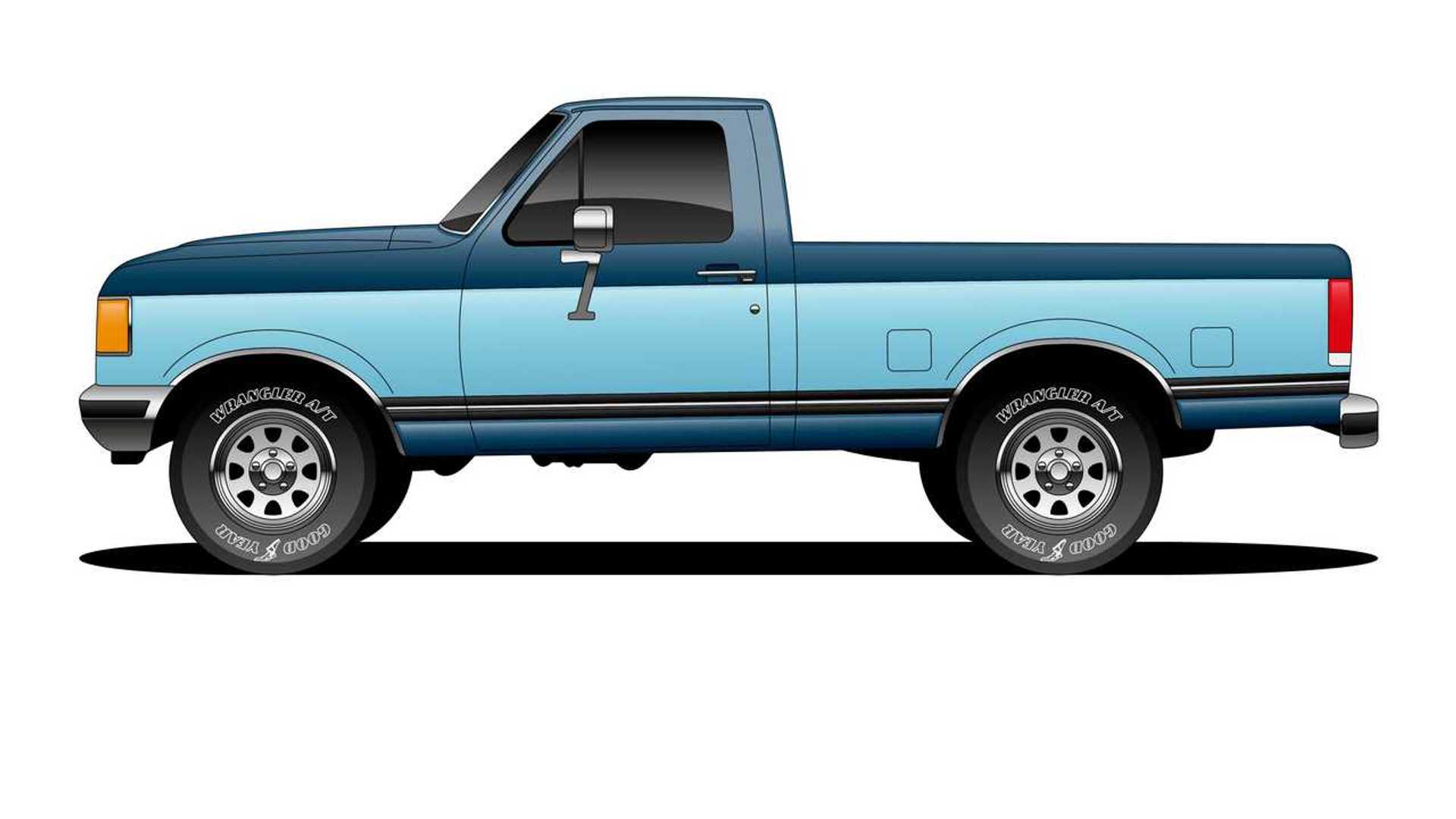 Basically a Euro-themed redesign of the seventh-gen, the F-150 adopted rounder edges and softer body lines starting in 1987. Power was returning under the hood, with 210 horsepower available in the optional 5.8-liter V8. Anti-lock brakes for the rear wheels appeared on the F-Series for the first time as well. 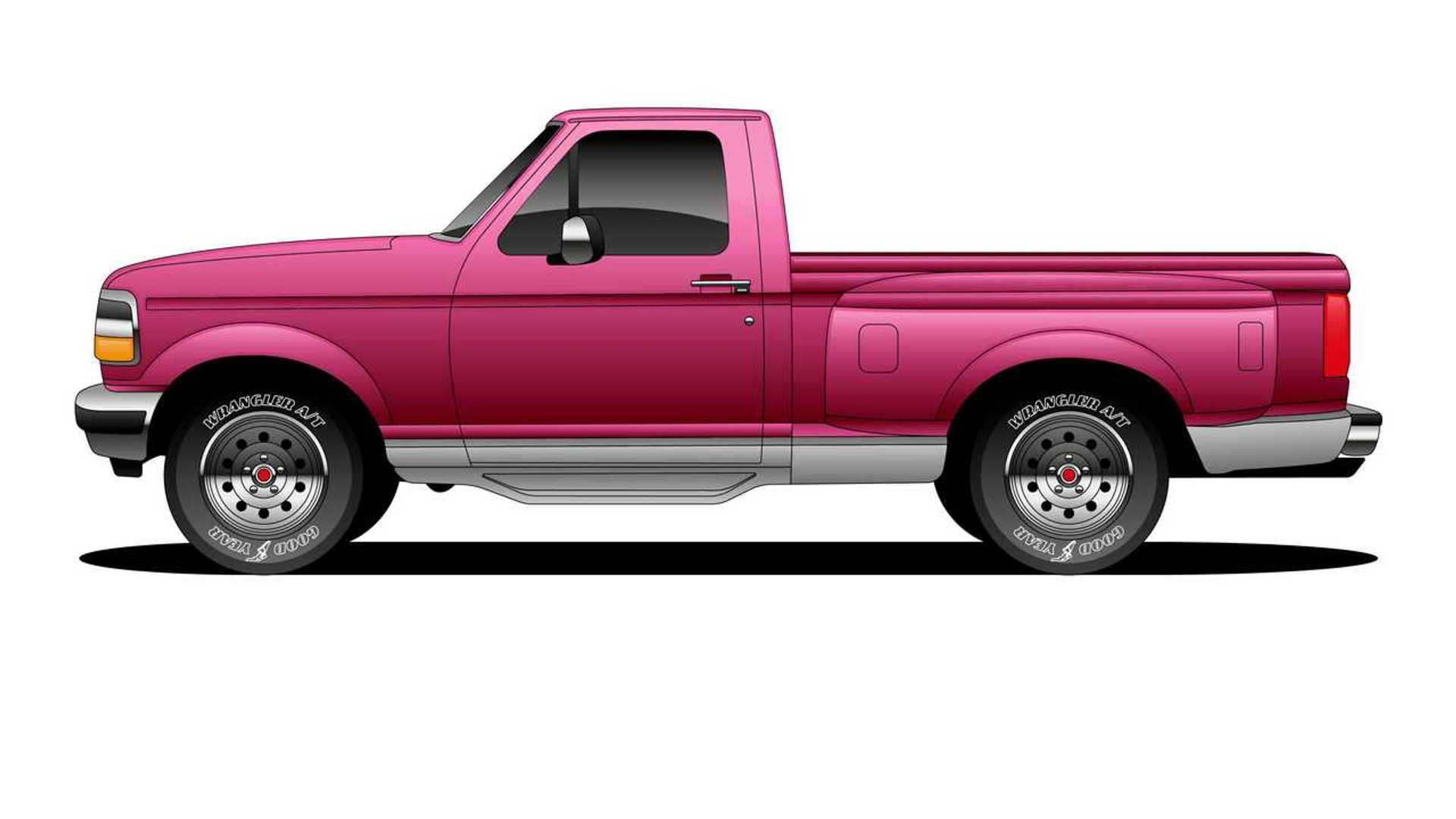 An even rounder redesign punctuated the ninth-generation F-150, but this generation also saw the arrival of snazzy options like leather interior and the return of the Flareside bed. It also gave birth to the performance-oriented SVT F-150 Lightning in 1993, featuring tuned suspension and a 240-horsepower version of the 5.8-liter V8. 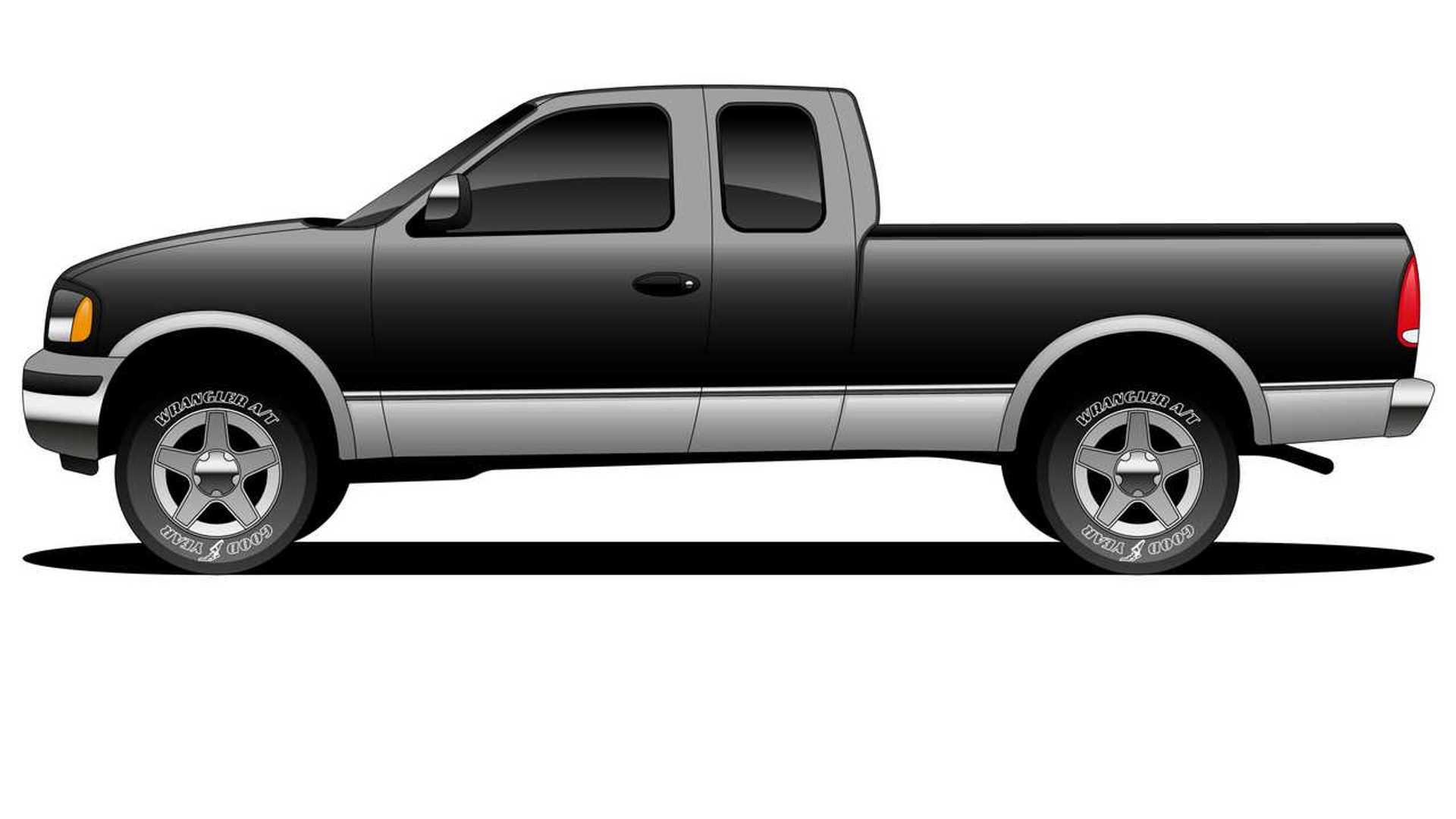 This generation is notable for many reasons. It's unique in that the previous-generation body style actually carried over for F-250 and F-350 models, hence why 1997 is listed for both the ninth-and tenth-gen truck. A full redesign saw the F-150 grow in size while also abandoning both the 5.0-liter V8 and the twin I-beam front suspension, features that stood with the F-Series for over 30 years.

This generation also marks the separation of body styles between the F-150 and the heavy-duty variants, with the F-250 and F-350 adopting the notched side window design that still exists on the F-Series today. On the high-performance front, the last SVT Lightning performance truck bowed out in 2004, pumping out 380 horsepower from a supercharged V8. 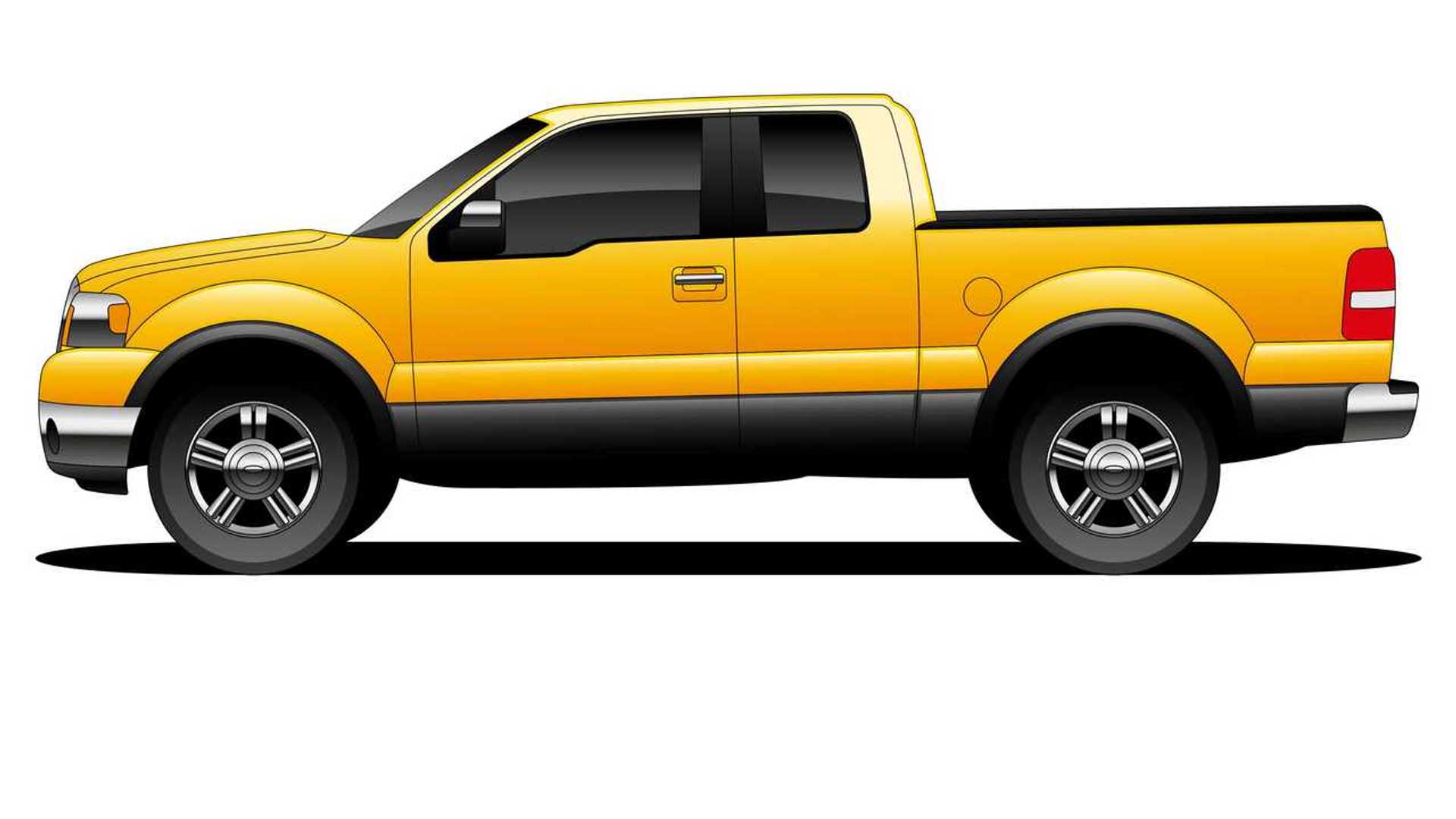 The F-150 got bigger and bulkier in 2005, borrowing more design cues from the Super Duty trucks. Luxury appointments for the truck were in full effect with the introduction of the King Ranch model, and a new boxed frame meant the truck could haul and tow bigger loads. 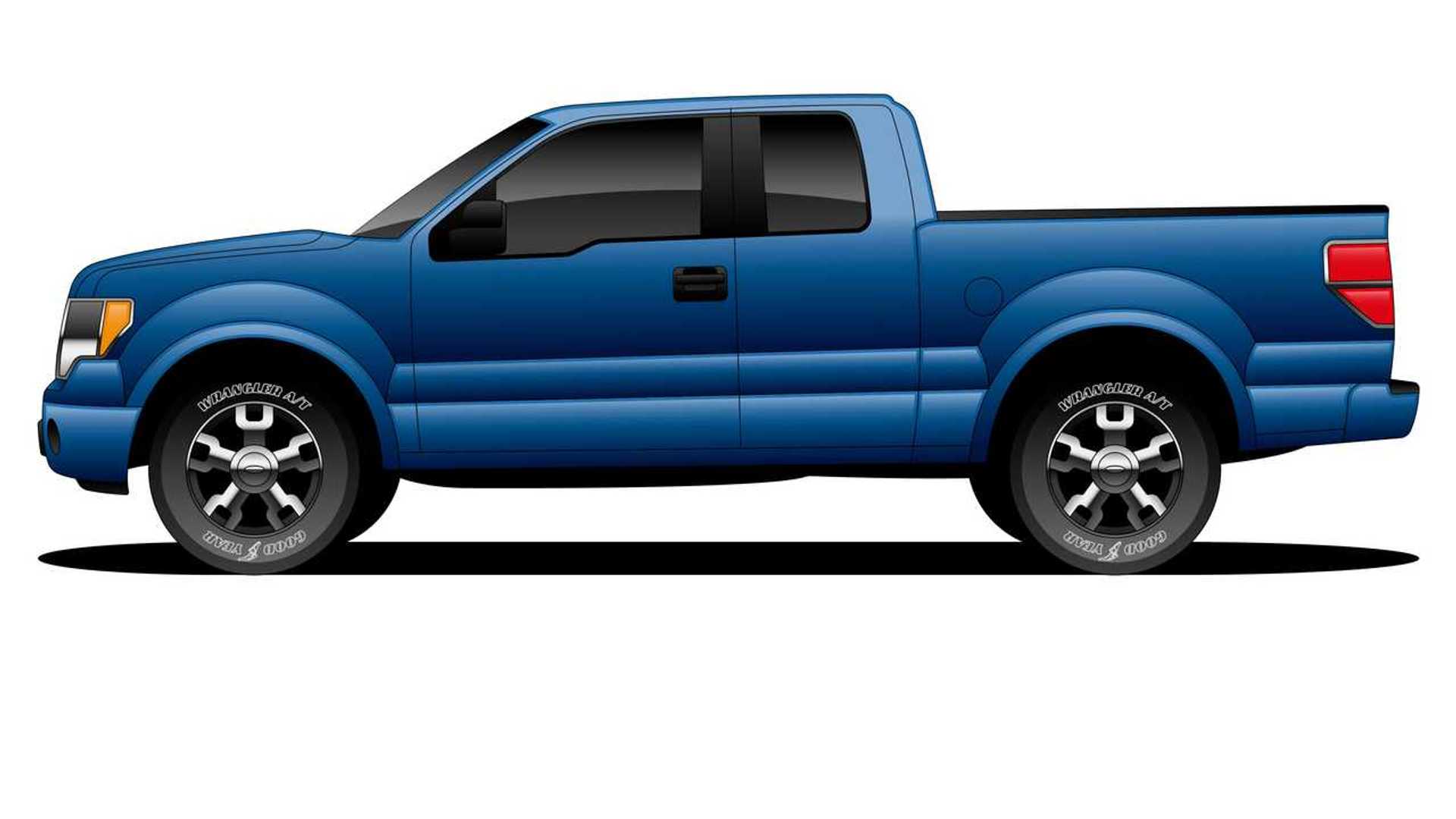 A relatively minor redesign of the previous-generation, this F-150 era will be forever remembered as the birth of the SVT Raptor off-roader. With big V8 power and a soft-sprung, high-travel suspension, the Raptor was designed to sprint down rough trails instead of merely crawling over them.

A major update came to the F-150 for 2015, not the least of which included prolific use of aluminum in its body to reduce vehicle weight. The switch was panned by Ford's competitors, though some aluminum crept into both the Ram 1500 and Chevrolet Silverado. It's generally believed the switch to aluminum prompted General Motors to offer a carbon fiber bed for the current GMC Sierra.

The story for the current-generation F-150 is still being written, though it will go down as being the first to offer electric power. It's certainly come a long way since 1948, save for the cargo bed in the back and a Blue Oval badge on the front.