The wildlife know how to live it up in Switzerland.

It's common for cars that have been left sitting to become homes for wildlife, but this is something else. This particular 1974 Porsche 911 Targa was discovered somewhere in Geneva, Switzerland, and while Geneva is famous for its banks, the local squirrels have been making a different kind of deposit. Instead of money and gold, it's been used to store nuts, and a lot of them. We know the Swiss have a high standard of living, but the fact that the country's squirrels are using a classic Porsche 911 as a larder is a crazy level luxury.

These pictures come from Porsche in Switzerland via a Facebook post. Unfortunately, details are scant, but when the rescuers got to the Porsche that's clearly been sitting for some time, they got a surprise when they popped the hood. Despite the nuts, it all looks in good shape other than the almost buried engine. If nothing has been eating through the wiring system, it might not even take much to get it started after a little tender loving care. The paint and roof look in good shape, so it has probably been sitting under a cover.

We don't get Porsches of this kind of vintage showing up very often here in the US. It was a dark time for 911s from 1975 to 1977 due to the strict emission control laws. As well as using thermal reactors, Porsche even removed some fan blades to increase temperatures. That meant engines didn't tend to last long, and leaves the remaining 1973 and 1974 models in high demand. The 1974 models got a bump in torque from a slightly larger engine size. We did get a 2.7 Carrera model but, unlike the European cars, it was just an appearance package. 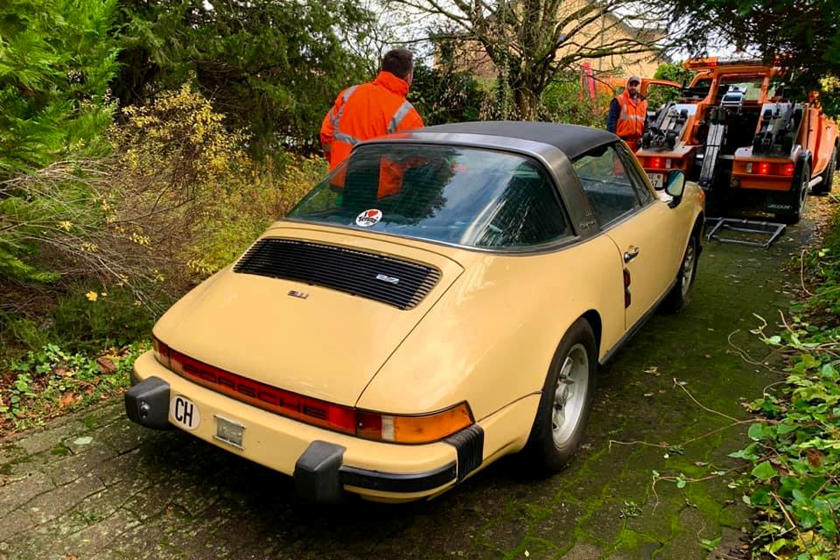