This Unimog Is The Last Adventure Vehicle You'll Ever Need

mercedesUnimog
It may look rough on the outside but the inside is plush.

Most people like to think of the Mercedes-Benz G-Class as Merc's most accomplished off-roader, but that's simply not true. The Unimog is not currently on sale in the USA, but there are specialist companies that will import one for you. It's a pity because the U 529 makes even the G63 4x4 Squared look like a toy.

A 1985 Unimog 1300L Camper recently went on sale and it's beautiful in its simplicity. Looking at it from the side, you can tell that the conversion was done by somebody who knew what they were doing. The additional bodywork at the rear has a minimal impact on the departure angle, and that's about it. It's actually quite exceptional that one man was able to fabricate all of this.

This particular Unimog was imported to the USA in 2004. The owner purchased it to build the ultimate off-road camper, and that goal was certainly achieved.

It's equipped with a 5.7-liter straight-six turbocharged diesel, an updated turbocharger, Bosch fuel injection, and a custom exhaust. There are no electronic nannies because they complicate things. The last thing you need in the middle of nowhere is an ECU failure. Even with the updated turbo and exhaust, the engine only produces 150 horsepower, which means the most you can hope for is 65 mph. Still, the idea of overlanding is to enjoy the scenery, so you might as well take it slow.

The 1300L has an eight-speed manual transmission with high and low ratios. Thanks to a part-time transfer case, you can even slap it in rear-wheel drive and pick up the kids at school. The transfer case also allows you to shift into 4WD on the go.

For the rough stuff, the Unimog is equipped with portal axles that increase the ground clearance to 17.3 inches, locking differentials on both axles, and a compressor in the engine to keep water out. The latter provides 0.2 bar to the wading system to force water out of the driveline.

Additional aftermarket accessories include a shovel, Garmin GVN 52 GPS navigation system, Ramsey 15000 Patriot winch, a rear-mounted industrial hoist rated at 11,000 pounds, and a set of Michelin XZL radial 395/85 R20 tires on custom two-piece StazWorks wheels. You'll find a spare wheel on the roof, which you can use in combination with the winch to create a Dead Man's Anchor.

That's if you manage to get stuck, and you'll have to try really hard to get stuck in this.

While the outside may look a little conservative, the living area is quite plush. It has laminated wood cabinets, a built-in stove, refrigerator, LED lights, a custom shower, toilet, towel warmers, a dining area for two, a flat-screen TV, and a full-size bed with a high-end mattress that offers personalized hip and shoulder comfort.

The cockpit is not as plush but has full leather seats, a Sparco steering wheel, and multiple communication devices.

While the Unimog may seem daunting to drive, it's quite the opposite. We had the pleasure of driving a 1300L that had been converted to a firetruck a few years ago, and it was surprisingly easy to get in and get going. The short nose makes it easy to place, making it no more daunting than a lifted G-Class.

All of this can be yours for just $300,000. While this may seem like a lot, it only has 24,000 miles on the clock. Considering what these inline sixes are capable of, it's hardly run-in. 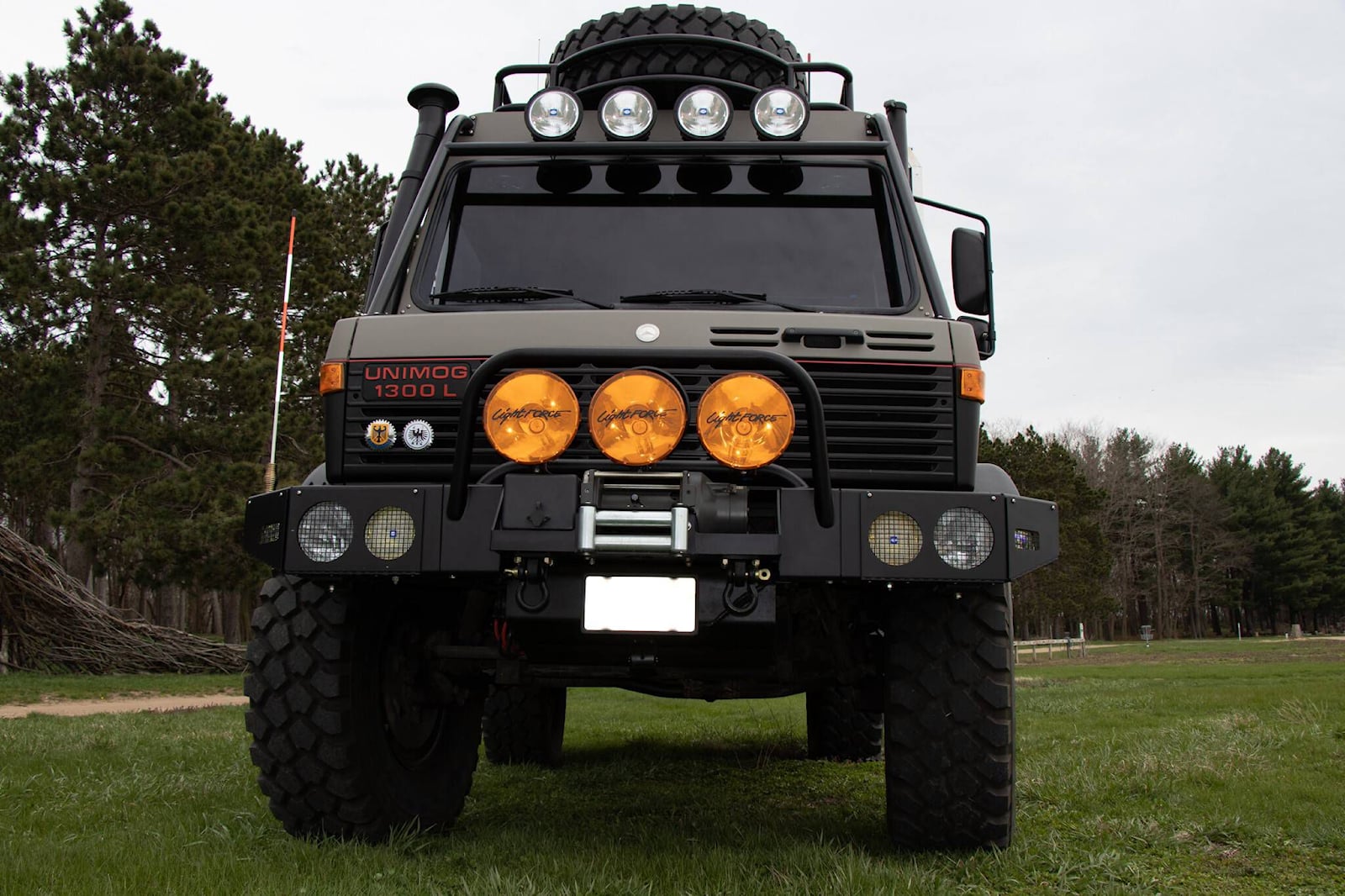 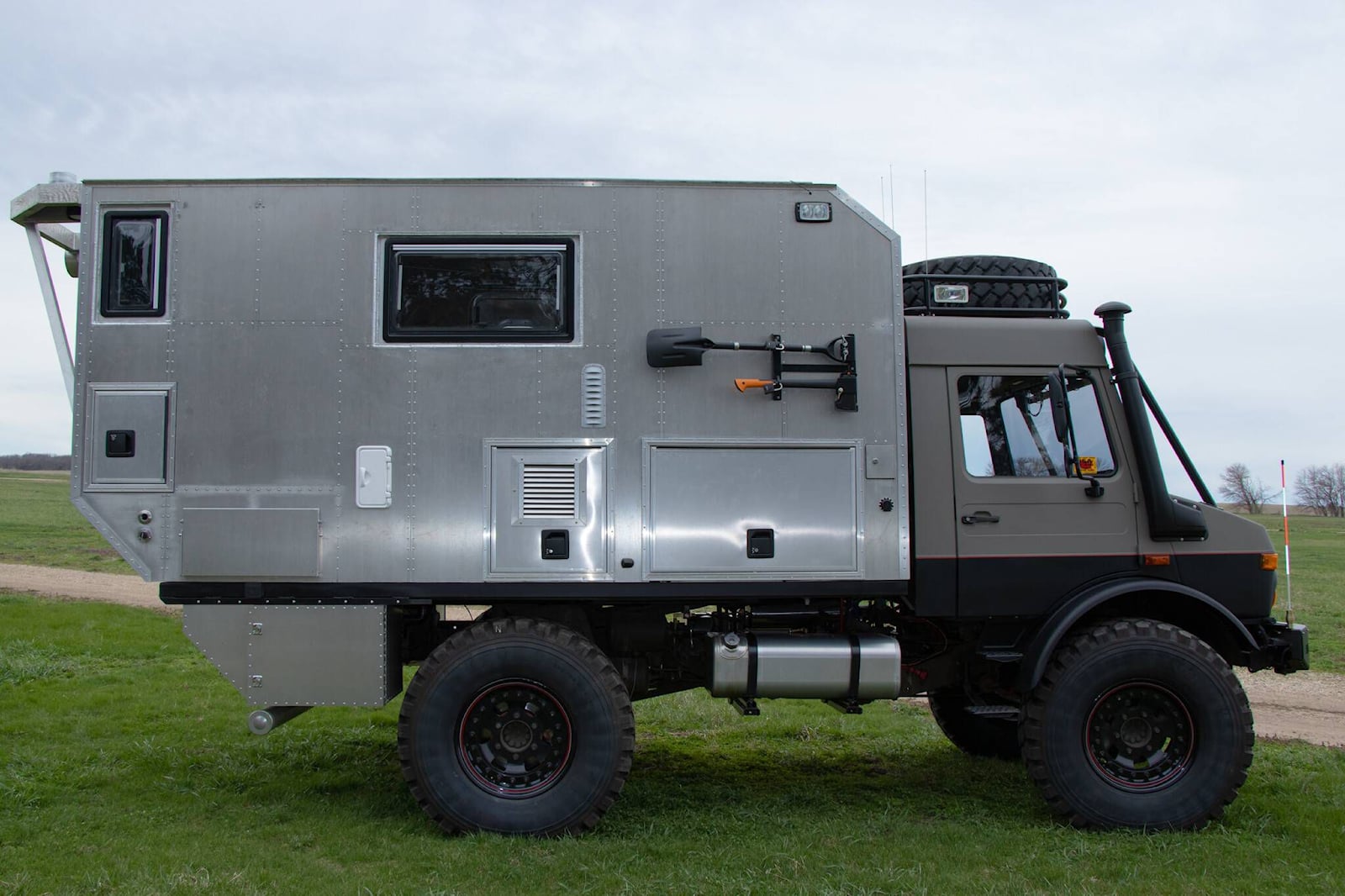 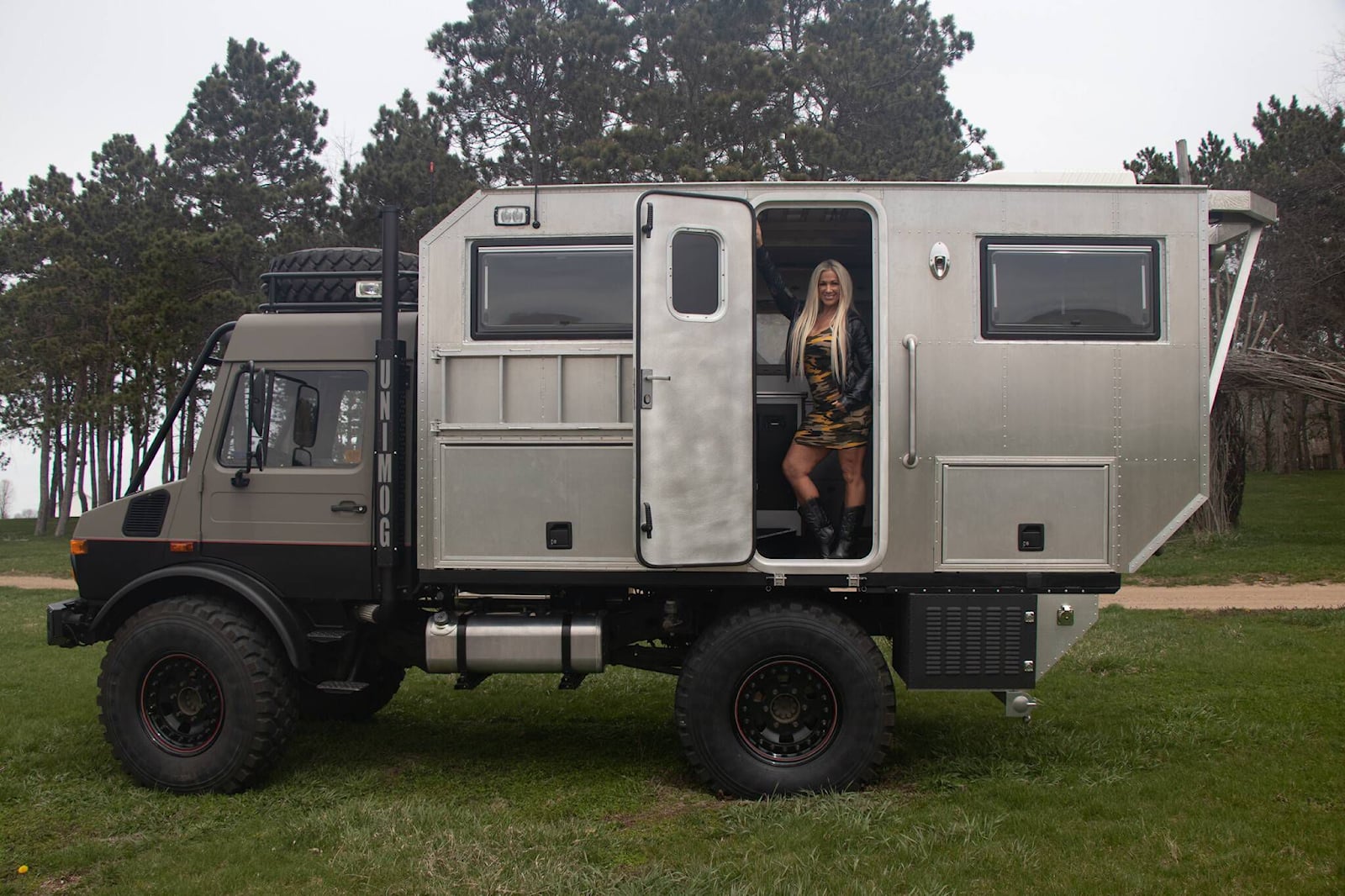