The iconic Aston Martin DB5 has been caught filming for the new James Bond film 'No Time to Die.'

Next year, not one, not two, but three Aston Martin cars will star in the new James Bond film 'No Time to Die', which releases in cinemas next April. Bond will be getting behind the wheel of the new Valhalla hypercar, as well as a vintage V8 Vantage that appeared in the 1987 Bond film 'The Living Daylights,' which was spotted being chased by a helicopter during a filming session.
Completing the trio will be the iconic DB5, which has appeared in every Bond film during the Daniel Craig era apart from the 2008 film 'Quantum of Solace.' No trailer or plot details have been released for 'No Time to Die' yet, but some new behind the scenes footage gives us a first look at the Aston Martin DB5 in action during a high-speed chase scene.

A video posted by MI6-HQ shows the DB5 being put through its paces during a film shoot in Matera, Italy. We get to see the DB5 perform some tail-sliding turns, and narrowly avoid scattering bystanders and traffic cars while leaving copious amounts of tire marks on the road.
All the action is being filmed by a black Mercedes-Benz GLE SUV camera car. While it isn't clear if the DB5 is evading enemies in the video, additional photos posted by MI6-HQ show it being pursued by a Triumph motorcycle and a sinister-looking Jaguar sedan.

The DB5 also appears to have taken a beating, as dents and scratches can be seen on either side – Q won't be happy. Let's hope it survives the scene in one piece, unlike the DB5 in 2012's 'Skyfall' that was blown up. This will also be the first time the Aston Martin DB5 has been used in a James Bond chase scene since it dueled with a Ferrari F355 in the 1995 film 'Goldeneye' starring Pierce Brosnan. Hopefully, it won't be long until an official trailer is released for 'No Time to Die' to give us a better look at the film's car action. 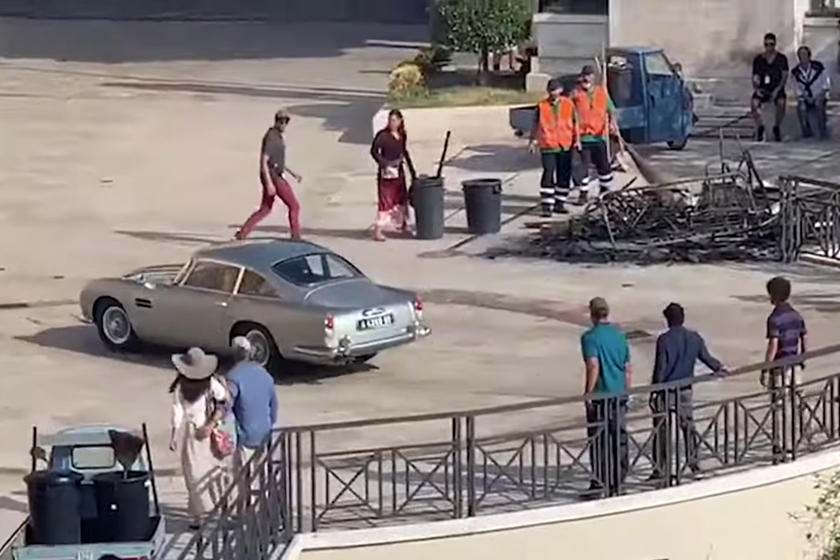