The Classic-Car Frenzy Is Over for Skittish Collectors The classic car market is coming to terms with a new reality, as years of climbing prices and spirited buying give way to a new era of more discriminating collectors wary of overpaying in unpredictable times.

Demand for cars costing more than $1 million collapsed at the 2019 Monterey Car Week in California last month, according to Hagerty, which compiles an index tracking collector-car prices. The sell-through ratio -- a gauge of the success of auctions -- slumped to 48% from 67% for these elite vehicles, while sales rates held up for cheaper models.

The trend highlights the unsustainable pace of growth for prices of vintage cars in recent years and how the market is adapting. A glut of inventory has taken a toll and some investor-collectors new to the game are proving more skittish than traditional enthusiasts in the face of economic uncertainty.

The classic car market is influenced by myriad factors that can produce price moves that surprise investment-led collectors, said Richard Wrightson, head of acquisitions at U.K.-based dealership Classic Motor Hub. "If there is a slight wobble or turn in the market for that particular model of car, suddenly a large number can appear on the market and in a short space of time values decrease."

Low interest rates and disappointing stock-market returns drove hordes of new buyers to collector cars after the 2008 financial crisis, pushing prices up across the board and ushering in a golden age that lasted much of the last decade.

That pulled more cars onto the market, including, for the first time, 1980s-era models like the Ferrari 308 and Volkswagen Golf GTI that cater to the tastes of new Generation X and Millennial collectors.

Global economic uncertainty has made newer collectors more discerning and bloated prices are "settling back to what is a sensible value," according to John Mayhead, an automotive journalist at Hagerty.

"It isn't down to the make and model anymore. It's down to the quality of the car," Mayhead said.

Meanwhile, the lower end of the market for vehicles below $100,000, including cars from the 1980s, has continued to boom. The segment saw the smallest drop in sell-through rate and, unusually, represented the largest share of lots sold at auction in Monterey, one of the world's premier classic car gatherings.

Buyers want these cars for the fun of it rather than the investment, Mayhead said. "It's the same as people going back to analog records rather than digital music." 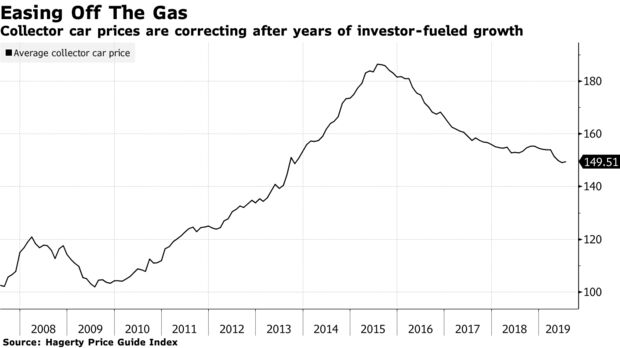